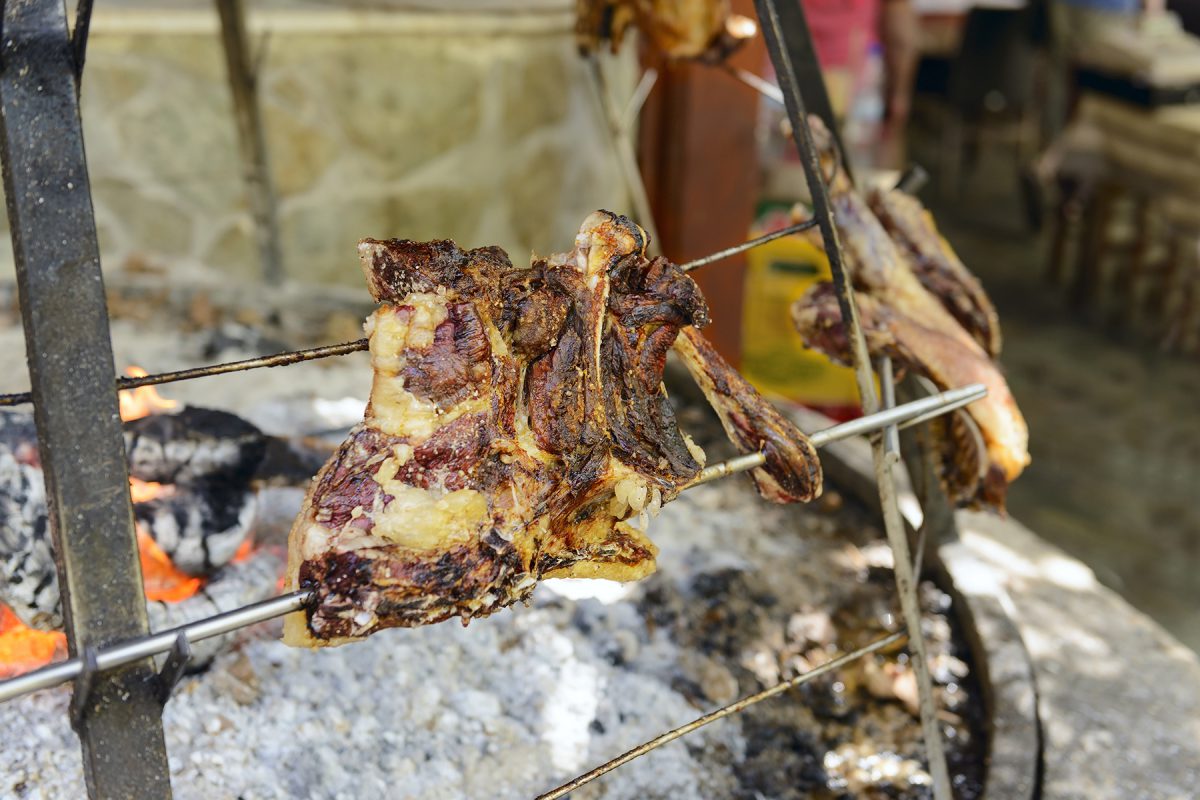 Antikristo: the star of the Cretan cuisine

Crete might be an island but a large part of its culture and culinary tradition is influenced by the high mountains that define its mainland. Cretans were drawn to the mountains as they provided a safe environment in times of constant attacks from the coast from pirates and other conquerors. Long periods of wartime also limited agricultural production, as men often had to hide in the mountains and fight so they could not contribute with their work. Therefore, Crete developed mainly a pastoral society and this is why meat dishes today outnumber fish dishes in traditional Cretan restaurants. The exceptional taste of Cretan meat is due to traditional herding practices and the way meat is cooked.

Local livestock (mainly goats and lamb) is largely free range and feeds from the aromatic herbs that grow on Cretan mountains, such as thyme, oregano, sage, and marjoram. Crete has one of the richest ecosystems of the Mediterranean and a unique flora with many endemic plants that give meat an exquisite taste that doesn’t require any “covering” with spices and oils.

Traditional meat cooking is very simple, and often only salt is used or very few herbs, such as rosemary and thyme. Many Cretan meat dishes are cooked together with wild greens and they are served with potatoes, pilaf, spaghetti, or just salad. We highly recommend that you try as many as you can during your vacation in Crete, but there is one you should definitely try, the star of the Cretan cuisine: Antikristo!

The name “Antikristo” refers to the cooking method which literally means “facing each other”. This method is very popular in Crete since ancient times and is traditionally used by shepherds and men living in mountainous areas, since it was very simple and easy to prepare. In fact, only salt and fire is required.

The meat used is lamb cut into large pieces and passed through huge wooden skewers that are then placed around a big fire opposite to each other. The meat is left to cook slowly (for about 4-6 hours) and does not require constant attention, so the men were free to do other chores. Plus, slow cooking makes the meat soft and juicy, secreting all the mountain scents and flavors, while the salt dehydrates the skin making it crispy and delicious. Similar cooking techniques are found in other pastoral societies of the Mediterranean and Latin America, but what makes Cretan antikristo so special is the natural flavor of Cretan mountain herbs and its long history on the island.

Tags: Cretan diet, what to eat

Previous Post Sea, mountain & culture: things to do near Malia
Next Post A short guide to Cretan music & dances