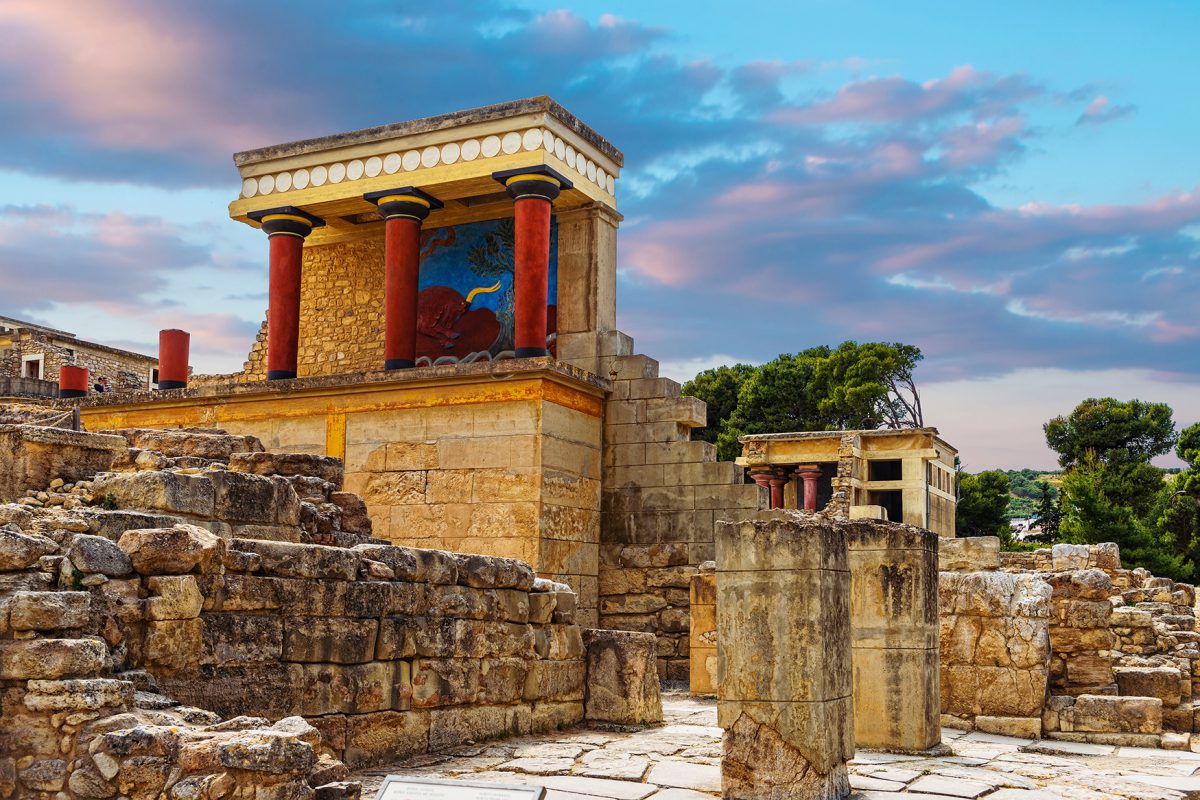 Visit the Minoan Palace of Knossos

Located on a low, rounded hill called Kephala, at a distance of about 6km to the south of Heraklion, the Minoan Palace of Knossos is the largest archaeological site ever discovered on Crete.

Being the administrative and ceremonial center of the Minoan civilization, one of the oldest ones and the first advanced civilization in Europe, a visit to the Minoan Palace of Knossos is like taking a trip to the thrilling legends and myths of the ancient Minoan culture, such as the story of the Labyrinth that housed the Minotaur and the myth of Daedalus and Icarus.

The great Minoan Palace of Knossos was first built around 1900 BC and suffered two major disasters throughout its long history. It was first hit by an earthquake around 1.700 BC, but was soon rebuilt in even greater splendor, marking the peak of the Minoan civilization with an estimated population, including the surrounding city, of up to 100.000 people shortly after 1.700 BC. Then, around 1.600 BC, an eruption in the island of Thera, some 100km to the north of Crete, one of the largest volcanic explosions in recorded history, devastated the palace again and marked the gradual decline of the Minoan civilization. After this, the palace at Knossos remained inhabited until around 1.400 BC, when it was finally destroyed and abandoned, possibly by the Mycenaeans.

Covering an area of approximately 6 acres (24.000 square meters), the palace complex was quite elaborate and impressive, made up of multi-storey apartment buildings, containing about 1.300 rooms connected with small corridors and narrow passages, thus resembling a labyrinth. It also included a theater and extensive storerooms with large clay containers (pithoi) for the storage of goods.

The high level of the Minoan civilization is also indicated by the sophisticated water management system of the Minoan Palace of Knossos, that made possible the continuous water supply and drainage.
Other points of interest include the Throne Room, with its famous bull fresco, as well as the Royal apartments, while outside the Palace you can visit the Little Palace, the Villa of Dionysos, decorated with magnificent mosaics, and the Royal Villa.

Finally, be sure not to miss the Archaeological Museum of Heraklion so that you can have the chance to view more findings excavated from the Minoan Palace of Knossos and, as some historians say, discover “the first link of the European chain”.

Previous Post Eleutherna, the heart of Crete
Next Post Cretaquarium: Discover the Mediterranean seabed with your kids!