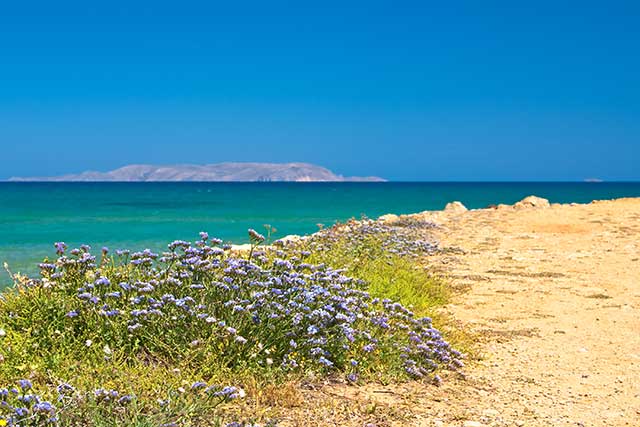 Dia, also pronounced Ntia by locals, is a rather small uninhabited island off the northern coast of Crete. Located about 7 nautical miles (approximately 13km) north of the city of Heraklion, Dia is part of the community of Elia and administratively belongs to the Municipality of Hersonissos. Its maximum length is 5km and its maximum width 3km and it covers an area of 12 square kilometers, while to the east and to the west of Dia, there are two islets, called Paximadi and Petalidi respectively. Nowadays Dia is part of the European network of Nature (Natura 2000), since on it there are a number of protected wildlife species as well as a number of protected plants.

Mythology
On clear days the island is visible from Heraklion and from resorts on its northern coast and from such a distance this little island looks like a gigantic crocodile (or lizard). According to mythology, the island of Crete was once attacked by a giant lizard, but Zeus, who was very fond of Crete since he was born and raised there, threw two pieces of rusk to the monster to distract its attention and then turned it into stone with a thunderbolt. In this way the island of Dia was created, while the small pieces of rusk were turned into the small islets to the sides of Dia.

History
During the Minoan Times the island was populated and played an important role in navigation with its five quiet bays in its southern part. The renowned oceanographer Jacque-Yves Cousteau carried out underwater explorations around Dia in 1974-76. Near the southern bay of the island he discovered large rectangular rocks that functioned as an artificial breakwater, thus suggesting that Dia was one of the principal and most important ports of Crete in the distant past. It is believed that the volcano eruption of Santorini in 1450BC destroyed everything and sunk the ancient harbor, leaving Dia a rocky island.

Access
There are organized daily cruises to the island of Dia departing from Heraklion and other northern resorts of Crete. The boat trip takes about an hour and a half, and once there you can enjoy swimming in Dias’ crystal clear waters at one of the few protected sandy beaches in the southern and the eastern part of the island.

Tags: attractions, destinations, Heraklion, Natura, what to do