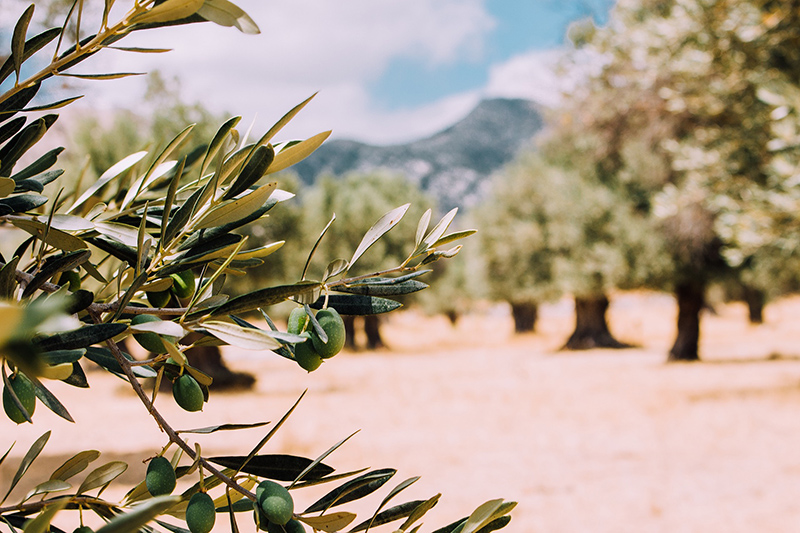 The Sacred Olive Trees of Crete

Of more than 30 million olive trees on Crete, 14 are sacred. Their sacrality comes from centuries of longing for the divine, justice, freedom, and absolution. The body in charge of classifying the olive trees is the Association of Cretan Olive Municipalities (ACOM). Here are five of the 14 holy trees that inspire awe on the island.

The Elevated Olive Tree of Vatolakkos

One of three sacred threes found in the municipality of Platanias, the monumental Elevated Olive Tree of Vatolakkos is unique. Its “elevated” denomination is associated with the religious ritual raising of the consecrated bread and wine during the Eucharist ceremony. Its contorted trunk bears marks of religious practices, too: a priest bored holes in the tree’s trunk, filled them with incense, and sealed them to protect the village against plague and other diseases.   Because it is 2000 years old and the only Mastoeidis – or Tsounati – varietal on the island, the tree is special.

The Mother Olive of Kamilari

In the municipality of Phaistos, in south-central Crete, the monumental olive tree of Kamilari attracts a lot of interest. It was grafted on a wild olive tree and is a Thrombolia, locally called Hontrolia varietal. If you visit the archeological sites in the area, you should take a few minutes to see this wonder of nature too. The tree is within a short distance from the Minoan Palace of Phaistos (1400 meters) and the Kamilari Tholos Tomb (1000 meters). It is 2800 years old, dating back to the Roman rule (67 BC – 330 AD). The trunk of the tree, which has a perimeter at the base of about 9.5 meters, is surrounded by 12 large rocks, a locals’ effort to protect the natural monument. Eight of these rocks are engraved with Minoan symbols. The tree bears enormous significance for the people in the area, who call it Mother Olive – in Greek, Mana Elia.

The Monumental Olive Tree of Kavousi

Aged about 3250 years, the Monumental Olive Tree of Kavousi is the oldest on Crete. The tree is in Azorias, about one kilometer away from Kavousi; hence it is sometimes referred to as the Azorias Olive Tree. It is a mastoeidis or mouratoelia varietal, grafted on a wild olive tree. The tree has a circumference of more than 22 meters at the base and a diameter varying between four and more than seven meters. Places of interest close to the Monumental Olive Tree of Kavousi include the archaeological site of Azorias and Vrontas and Kastro’s ancient settlements.

The Monumental Olive Trees of Amari

In the Amari municipality in the Rethymno regional unit, there is an ancient grove of olive trees stretching over some 500 acres of land not far from the Minoan settlement of Monastiraki. Over 1000 grove trees were uprooted because of low productivity, yet two aged over 3000 years survive and date back to the sub-Minoan period (1100-1000 BC). Their perimeter at the base is 18.80 m and 19.40 m, respectively. Worth seeing in the area is the Monastiraki Minoan Palace, which is about 1000 meters away from the grove.

The Monumental Olive Tree of Gortyn

Besides an ancient plane tree and archeological sites denoting that this was the most populous town during Crete’s Roman occupation, Gortyn is also famous for its sacred olive tree. It stands in an ancient olive grove or astounding beauty between Agioi Deka and Mitropoli. You can explore the grove to see archeological remains, like ruined walls and fallen pillars, but also the Monumental Olive Tree of Gortyn, which is about 1600 years old, which encases a Roman column in its trunk. The tree is a hontroelia varietal grafted on the rootstock of a wild olive tree.

Wherever you go on Crete, you will see countless olive groves scattered all over the land. The island boasts more than 30 million olive trees, some young, others old enough to have witnessed some of Crete’s most significant moments in history.

Previous Post An Unworldly Daytrip to Katharo Plateau: The Table of the Gods
Next Post Greek Taverna: Meze and Retsina Wine