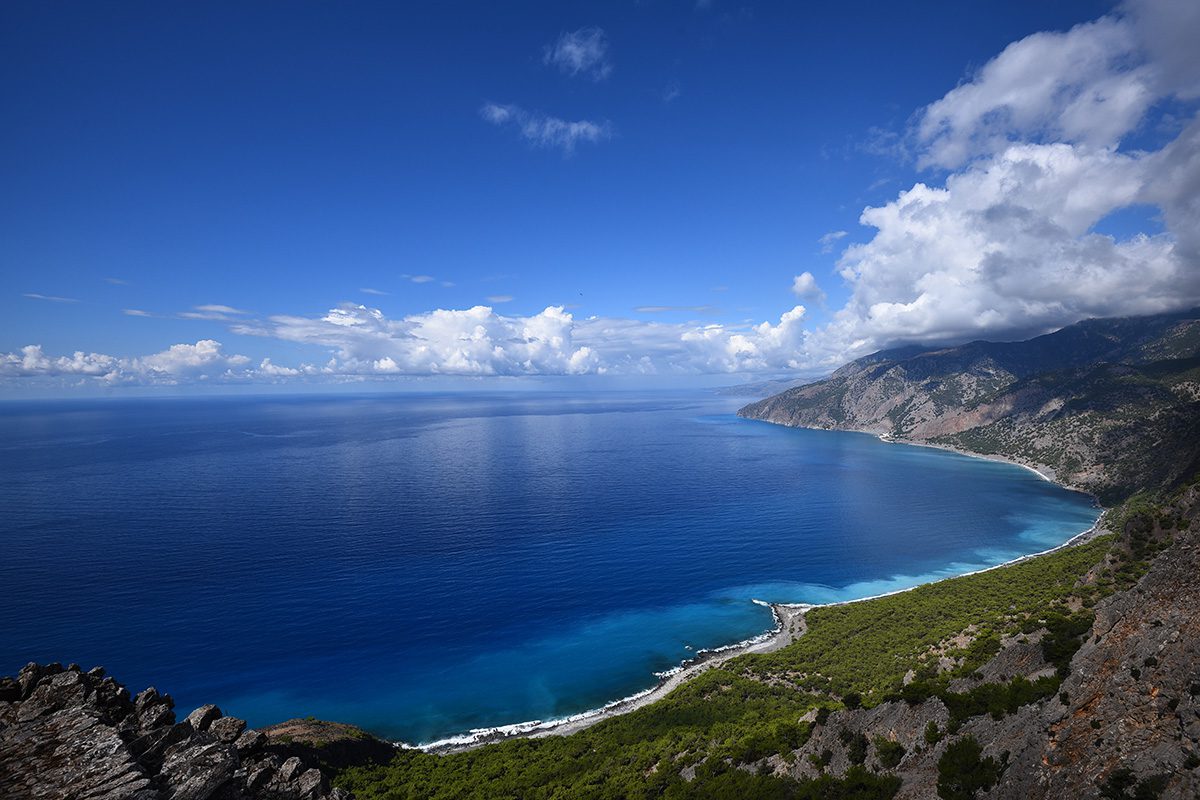 Known as Sfakia to most, this village on Crete’s south coast should be on every traveller’s itinerary. An exhilarating drive through the White Mountains from Chania or Rethymno (the journey from either takes less than 90 minutes) there’s something uniquely welcoming about this former tiny fishing village.

Long-renowned as an outpost of rebellion against Crete’s foreign occupiers, the bullet holes in the road signs as you approach give a sense of Sfakian entertainment, but fear not, this is a friendly place, where philoxenia – the great Greek custom of bestowing kindness to strangers – is alive and well.

A stroll along the shaded pedestrians-only seafront might be a simple pleasure, but to take refreshment or a freshly caught seafood meal here, makes this a day-trip to savour. For Sfakia is a place to unwind, its rhythm determined by the ebb and flow of the Anendyk ferries that ply Crete’s south west coast and call Sfakia their home.

Sailing below the White Mountains which form a towering curtain falling to the sea in these parts, the flat-bottomed Samaria ferry and its sister ship Daskaliogiannis have been the lifeline of the tourist economy here for decades, connecting Sfakia with Paleochora, with stops at Loutro, Agia Roumeli and Sougia. The island of Gavdos, Europe’s most southerly point, is also served by Anendyk from Sfakia.

With Agia Roumeli being the southern exit of the Samaria Gorge, most of the 140,000 hikers a year that walk the gorge arrive by ferry at Sfakia in the late afternoon, footsore but triumphant. Like the tide, they wash in, to be carried away by a fleet of coaches at the ready.

If you have a car, Sfakia makes a great base for exploring the area – the nearby mountain villages of Anopolis (11km) Komitades (5km) at the foot of the Imbros Gorge, and the coastal hamlet of Frangokastello (12km) with its Venetian castle, all make for close and fascinating excursions.

Beaches
Sfakia has one. Vrisi beach is small, on the village’s western edge. Llingas beach is a kilometre further with its own taverna. Head further afield (by boat) to Sweetwater and Loutro (or beyond) for better beach experiences. Frangokastello beach is also recommended.

Best bites
You can’t miss Livikon (2825 091071) and H Koyzina’s spread of tables as you head down the seafront. Spacious, contemporary and regularly well-reviewed, fish and seafood get top billing at these Sfakia favourites.

Further on, the Lefka Ori restaurant (2825 091205) near the beach is a gem. One of the first tavernas to open in Sfakia, the Lefka Ori exudes the friendliness of a traditional seaside taverna. Founder Andreas Fasouladis still cooks and son Yiannis manages this jewel of a place.

Getting around
Depending on the time of year, Anendyk’s ferries leave Sfakia for Loutro and Agia Roumeli, connecting at Agia Roumeli for Sougia and Paleochora up to five times a day. Check timetables at [https://anendyk.gr/] for details. Bad weather can affect sailings.