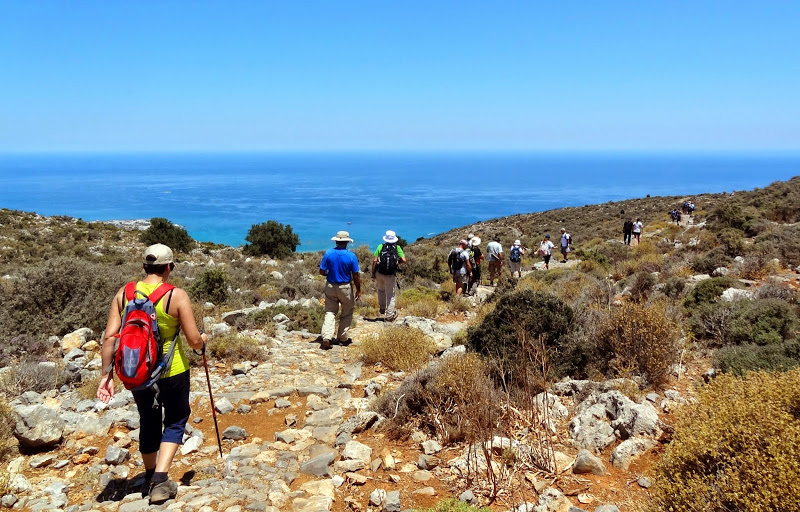 Many visitors to Crete do not realize the island offers hiking experiences like no other. In all, there are more than 440 hiking routes on Greece’s largest island. In the countryside surrounding Malia, you will find several unique footpaths leading past wonderful nature and sporting spectacular views of the Cretan coastline.

Long before beach tourism hit the north shores of Crete, the people of Malia and the village of Mohos developed very close relationships because of agriculture. In the 19th century, locals built a stone path to connect the two areas better. Well preserved, even until today, the trail is a highlight for hikers visiting this part of Crete.

Starting in Mochos, hikers walk across the village’s soccer field, ascending a hill past an old mill park where locals used to grind their grains not so long ago before modern factories took over this part of agriculture. At the route’s highest point, hikers experience a stunning view of the Cretan Sea (Kritiko Pelagos) before descending a stone-paved path that leads past Maria’s Cave before descending into Malia.

Although the stalagmites show signs of vandalism caused by the less considerate part of tourists, Maria’s Cave is worth seeing. It’s a small cave – measuring about 30 meters in length – with narrow passages leading to the main room. Its ceiling and wall speleothems – especially the stalactites – that remained untouched are spectacular. Beware that the cave’s humidity is relatively high, even in the summer months.

Another wondrous hike in the area is also from Mochos down to Stalis. The trail’s story comes from Bulgarian war captives brought to Crete during World War I to reconstruct this ancient path that was once the only connection between the two villages. Building such footpaths was a costly and challenging endeavor at the time – thus, the project bore great importance in the area. The villagers of Mochos had better access to Stalis down below. With the main road construction, the footpath lost its usefulness but gained appeal as a hiking route.

The trail begins in Stalis and ascends the rugged mountainside up to the monastery of Axion Esti, ending in Mohos after a two-hour ascent of some 400 meters above sea level. Trekkers will find the breathtaking views of Stalis, Malia, and the Cretan Sea spellbinding. If you are on this trail, consider visiting the Monastery of Virgin Mary Theogennitor, which is just 300 meters off-route.

This steep hike is along a well-made path beginning in the Chamoprina Woods outside Malia. The trail runs through a holm-oak forest and awe-inspiring countryside, affording Crete’s northern coast’s stunning views.

Azilakes Forest, in the foothills of Mount Selena in the island’s Dikti Range, features a rare species of holm-oak, Quercus ilex, endemic of Crete and the Aegean Islands. After the forest, the trek leads past Azilakodasos, finally ending at the Saint George Vrachasotis monastery. There is also a longer version of this hike that runs through amazing Krassi, high up on the slopes of Lassithi Plateau.

Many tourists prefer Crete’s languorous beaches, but some adventure off-the-beaten-path for such activities that are commonplace among Cretans, who love long walks and hikes in nature. If you want to experience the island like a local when visiting Malia, consider one of these adventures in nature.

Previous Post Chania Adventures: Exploring Chora Sfakion
Next Post An Unworldly Daytrip to Katharo Plateau: The Table of the Gods